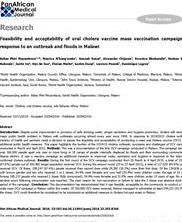 Despite some improvement in provision of safe drinking water, proper sanitation and hygiene promotion, cholera still remains a major public health problem in Malawi with outbreaks occurring almost every year since 1998.

In response to 2014/2015 cholera outbreaks, the ministry of health and partners assessed the feasibility and acceptability of conducting a mass oral cholera vaccine (OCV) as an additional public health measure. This paper highlights the burden of the 2014/15 cholera outbreak, successes and challenges of OCV campaign conducted in March and April 2015.

This was a documentation of the first OCV campaign conducted in Malawi. The campaign targeted over 160,000 people aged one year or more living in 19 camps of people internally displaced by floods and their surrounding communities in Nsanje district. It was a reactive campaign as additional measure to improved water, sanitation and hygiene in response to the laboratory confirmed cholera outbreak.

This documentation has demonstrated that it was feasible, acceptable by the community to conduct a large-scale mass OCV campaign in Malawi within five weeks. Of 320,000 OCV doses received, Malawi managed to administer at least 294,221 (91.9%) of the doses. OCV could therefore be considered to be introduced as additional measure in cholera hot spot areas in Malawi.