Beyond the Crisis: Did the Ebola Epidemic Improve Resilience of Liberia’s Health System? 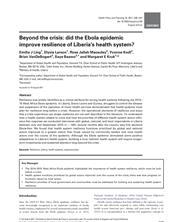 Resilience was widely identified as a critical attribute for strong health systems following the 2014–15 West Africa Ebola epidemic. In Liberia, Sierra Leone, and Guinea, struggles to control the disease and suspension of the operation of many health services demonstrated that health systems must plan for resilience long before a crisis. However, the operational elements of resilience and ways that a crisis experience can shape resilience are not well described in the literature.

To understand how a health system adapts to crisis and how the priorities of different health system actors influence this response we conducted interviews with global, national, and local respondents in Liberia between July and September 2015, several months after the country was first declared Ebola-free.

We found that health system resilience functions prioritized by global and national actors improved to a greater extent than those valued by community leaders and local health actors over the course of the epidemic. Although the Ebola epidemic stimulated some positive adaptations in Liberia’s health system, building a truly resilient health system will require longer-term investments and sustained attention long beyond the crisis.