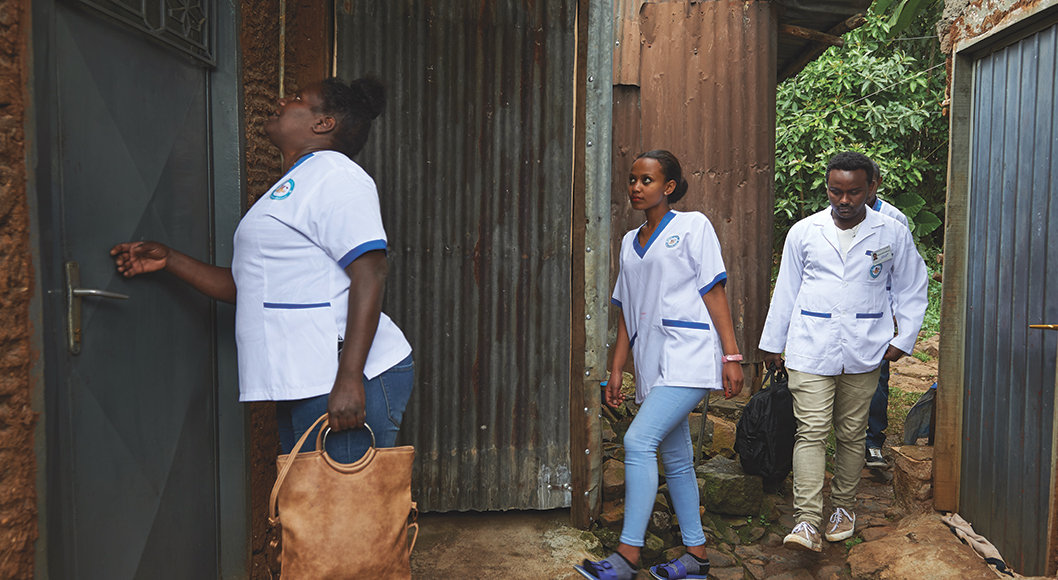 Strengthening Ethiopia’s Urban Health Program (SEUHP) targeted vulnerable populations and reached an estimated 2.4 million households by strengthening Ethiopia’s Urban Health Extension Program (UHEP) in 49 cities/towns in seven regions over the life of the program. SEUHP assisted the GoE to improve the quality of community-level urban health services, increase demand for facility-level health services, strengthen regional platforms for improved implementation of the national urban health strategy, and improve collaboration between various sectors working on urban sanitation and waste management. JSI's work reached vulnerable groups, including those in the lowest wealth quintile, marginalized communities, and individuals, and those who were not accessing health services; as well as supporting initiatives in workplaces, youth centers, and schools. The program enhanced the capacity of Urban Health Extension professionals (UHE-ps), who are the centerpiece of the UHEP. More than 222,260 people living in urban towns received higher-quality RMNCH services delivered by trained UHE-ps.

By 2050, 42% of Ethiopians will live in urban settings. Rapid urban population growth is placing pressure on infrastructure, social environments, and health and educational systems. Health problems such as the transmission of HIV, TB, and water-borne diseases are exacerbated by crowded urban conditions and changing social norms, and some urban residents, especially those in the lowest wealth quintiles, have similar – or worse – health outcomes than their rural counterparts.

SEUHP was supported by the U.S. Agency for International Development (USAID) to improve the health status of the urban population in Ethiopia by reducing HIV/tuberculosis (TB)-related and maternal, neonatal and child mortality and the incidence of communicable and non-communicable diseases (NCDs). SEUHP builds upon the many experiences and lessons learned under JSI’s USAID/Urban Health Extension Program (USAID/UHEP), which operated from 2009-2012. A major lesson learned under USAID/UHEP and urban health programs around the world is that addressing urban health requires the engagement of many different sectors of government and society, as well as the integration of public health, social science, epidemiology, urban planning, and policy.

More than 5000 UHE-ps were trained on Integrated Refresher Training Modules and SEUHP provided supplies to 2,300 UHE-ps and worked with regional health bureaus (RHBs) and town health offices to either renovate/ maintain or set up duty stations for UHE-ps. To ensure UHE-ps continue to have access to the supplies they need to do their jobs well, SEUHP advocated for town health offices and health centers to the necessary budget for proper resources, as well as for policy-level improvements to set standards for required service provision.

This was achieved by enhancing the capacity of Urban Health Extension professionals (UHE-ps), who are the centerpiece of the UHEP. More than 222,260 people living in urban towns received higher-quality RMNCH services delivered by trained UHE-ps.

Together with Ethiopian partners and stakeholders, including Emmanuel Development Association (EDA) and Addis Ababa University, SEUHP strengthened the Government of Ethiopia’s (GoE) Urban Health Extension Program (UHEP) by improving the quality, use, and management of community-level urban health and related services. Battling Breast Cancer Around the World: One Woman's Story