Willingness to Pay for Condoms among Men in Sub-Saharan Africa 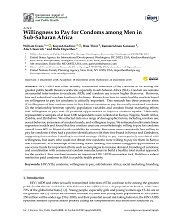 HIV/AIDS and other sexually transmitted infections (STIs) continue to be among the greatest public health threats worldwide, especially in sub-Saharan Africa (SSA). Condom use remains an essential intervention to eradicate AIDS, and condom use is now higher than ever. However, free and subsidized condom funding is declining. Research on how to create healthy markets based on willingness to pay for condoms is critically important. This research has three primary aims: (1) willingness of free condom users in five African countries to pay for socially marketed condoms; (2) the relationship between specific population variables and condom brand marketing efforts and willingness to pay; and (3) potential opportunities to improve condom uptake.

Data was collected from Kenya, Nigeria, South Africa, Zambia and Zimbabwe on a range of demographic factors, including condom use, sexual behavior, awareness of condom brands, and willingness to pay. It was found that free condom users are overwhelmingly willing to pay for condoms overall with variability by country. Free users were consistently less willing to pay for condoms if they had a positive identification with their free brand, suggesting that condom branding is a critical strategy. In a landscape of declining donor funding, this research suggests opportunities to use scarce funds for important efforts such as campaigns to increase demand, branding of condoms, and coordination with commercial condom manufacturers to build a healthy total market approach for the product. Free condoms remain an important HIV/AIDS prevention tool.