Temporal Improvements in Long-term Outcome in Care Among HIV-infected Children Enrolled in Public Antiretroviral Treatment Care: An Analysis of Outcomes from 2004 to 2012 in Zimbabwe 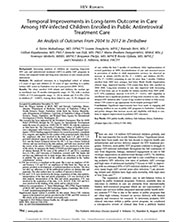 Methods: We analyzed outcomes in a longitudinal cohort of infants (<2 years of age) and children (2-10 years of age) enrolling in a public tertiary ART center in Zimbabwe over an 8-year period (2004-2012).

Results: The clinic enrolled 1644 infants and children; the median age at enrollment was 39 months (interquartile range: 14-79), with a median CD4% of 17.0 (interquartile range: 11-24) in infants and 15.0 (9%-23%) in children (P = 0.0007). Among those linked to care, 33.5% dropped out of care within the first 3 months of enrollment. After implementation of revised guidelines in 2009, decentralization of care and increased access to prevention of mother to child transmission services, we observed an increase in infants (48.9%-68.3%; P < 0.0001) and children (48.9%-68.3%; P < 0.0001) remaining in care for more than 3 months. Children enrolled from 2009 were younger, had lower World Health Organization clinical stage, improved baseline CD4 counts than those who enrolled in 2004-2008. Long-term retention in care also improved with decreasing risk of loss from care at 36 months for infants enrolled from 2009 (aHR: 0.57; 95% confidence interval: 0.34-0.95; P = 0.031). ART eligibility at enrollment was a significant predictor of long-term retention in care, while delayed ART initiation after 5 years of age resulted in failure to fully reconstitute CD4 counts to age-appropriate levels despite prolonged ART.

Conclusions: Significant improvements have been made in engaging and retaining children in care in public ART programs in Zimbabwe. Guideline and policy changes that increase access and eligibility will likely to continue to support improvement in pediatric HIV outcomes.