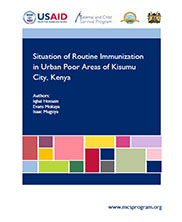 In Kenya, according to a 2013 assessment, approximately 353,000 people are unimmunized,1 and DPT3 coverage in the poorest wealth quintile is 10% lower than in the highest quintile. A situation analysis of routine immunization (RI) in Kisumu City was conducted to assess the immunization status of children, and to understand the challenges and barriers to access and utilization of immunization services among the urban poor.

This assessment was primarily qualitative. Methods included in-depth interviews (IDIs) and focus group discussions (FGDs). However, since disaggregated data for the slum areas were not available at the health facility level, a rapid survey of 75 households was conducted in each of the slum areas. The purpose of the slum survey was not to estimate the coverage in the slums but to gain firsthand knowledge of the immunization status of children living in close physical proximity to health facilities offering immunization services in the slum areas, and to identify mothers of partially and fully immunized children for FGDs.

Access to immunization in the urban poor areas of Kisumu City was found to be high. However, utilization of immunization services was not as high; 20–70% of children in each slum dropped out and did not complete the immunization series. Shortages of staff, lack of funds for outreach, large catchment areas, frequent in and out migration of people in slums, and lack of training were mentioned as challenges by the health facility nurses. Mothers of partially immunized children gave a number of reasons for not being able to complete vaccination for their children, including attitude of health care workers, quality of immunization services, competing priorities of parents, lack of information/misconceptions, and lack of motivation of mothers/caregivers.

The findings of this assessment are invaluable for the development of strategies and plans to strengthen RI services and for achieving equitable coverage among different populations in Kisumu City. The findings can also be applied to other Kenyan cities. JSI/Maternal & Child Services Project. 2017.