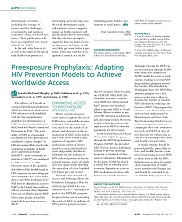 The availability of PrEP as a biomedical mechanism for HIV prevention is considered a “game changer” in HIV prevention efforts, much as the widespread availability of highly active antiretroviral therapy (HAART—more commonly referred to as “ART”) was considered for HIV treatment in 1996. However, many of the questions that followed this breakthrough in HIV treatment are now being put forth regarding PrEP. How much does it cost? Who should pay for it? Will there be disparities in access to PrEP in the United States and how will we overcome these disparities? How can we afford to pay for PrEP when many people around the world still do not have access to ART?

In the United States, the Ryan White HIV/AIDS Program, through the AIDS Drug Assistance Program (ADAP), has provided ART for low-income individuals, helping to provide lifesaving treatment to hundreds of thousands of individuals. Administered by the states, ADAP has played a crucial role in reducing socioeconomic disparities in access to HIV medications for those with limited or no health insurance. Although Truvada for PrEP cannot be purchased through ADAP, some states have adapted the ADAP model for access to medications, resulting in several PrEP drug assistance programs around the country.

A similar strategy should be pursued globally, particularly in low- and middle-income countries, for increasing access to PrEP to those most at risk for HIV. Infrastructure in place for supply chain management of highly active antiretroviral therapy can and should be extended to include PrEP. Although funds may or may not be used to purchase PrEP, the same strategies for negotiating reduced pricing by purchasing in bulk as was done for ART may also be used to purchase PrEP in bulk.

PrEP has become an important part of the more recent HIV prevention programs, especially those that focus increasingly on biomedical prevention technologies; therefore, it necessitates an increase in the role of clinical providers in treating HIV and preventing new infections. Thus, the most likely path to expanding this model and achieving access to PrEP worldwide is to use the institutional pathways and funding mechanisms that have supported global efforts to expand access to HIV treatment.