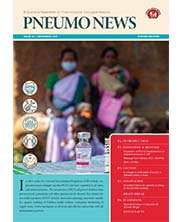 Technical Assistance to Expand PCV in 14 States of India

Over 1.2 million children die before their 5th birthday in India every year. Approximately, 16% of these deaths are due to pneumonia, out of which 50% deaths are attributed to Pneumococcal Pneumonia. With 23% of the global burden and 36% of the WHO regional burden, India is amongst one of the leading Asian countries that account for the highest number of deaths due to pneumococcal infection caused by Streptococcal pneumoniae in children under 5 years.To address this huge disease burden globally, WHO has recommended the inclusion of Pneumococcal Conjugate Vaccine in the routine immunization programmes of all countries.

PCV was introduced in 2017 and was expanded in a phased manner. Between 2017-20, the PCV was introduced in five states namely, Uttar Pradesh, Bihar, Madhya Pradesh, Himachal Pradesh, and Rajasthan under the Universal Immunization Programme (UIP) of India. In 2021, the PCV was rapidly expanded to the remaining states and now all infants have access to the PCV which is provided free of cost under the UIP. JSI has been providing the technical support to the national and state governments, commencing in October 2020, to introduce PCV in the UIP.

JSI has been facilitating the Training of Trainers (ToTs) at the regional and state levels. Furthermore, JSI has participated and assisted in the various planning meetings for the PCV introduction and has helped draft/update the training and IEC materials in 13 regional languages including English. The National and State JSI teams have ensured the timely dissemination of the key messages at various platforms across the States.

To reinforce the key messages for the frontline health workers (FLWs), JSI has developed 5 short animated videos capturing the key points and important messages for the vaccinators and social mobilizers which have been being shared via WhatsApp with the FLWs. These videos have been translated into Hindi and 11 regional languages.

The introduction of PCV is also an opportunity to identify gaps and plan proper mitigations to further strengthen the Routine Immunization Programme in India. JSI has helped the states in their respective planning, preparedness assessment (by developing an online tool, PROMPT for paperless assessment with a live real-time dashboard for monitoring), resource identification and effective utilization, training of all concerned staff (from the highest-ranking state officials to the vaccinators and mobilizers) together with reporting, recording and documenting of all the activities. Post the introduction, JSI is constantly supporting the government in successful field implementation and robust monitoring.