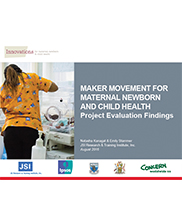 The Maker Movement for Maternal, Newborn and Child Health (Maker) was a pilot project implemented as part of the Innovations for MNCH (Innovations) initiative. Maker, implemented in Kenya, aimed to address gaps in the supply and availability of functional MNCH medical equipment at Kenyatta National Hospital (KNH) and lower-level facilities that are responsible for helping women deliver. The Maker pilot forged strong partnerships between the physicians, nurses, and biomedical engineers at KNH and the engineers at the UoN Fab Lab to build new pieces of equipment or spare parts for select MNCH equipment and improve the supply, availability, reliability and affordability of the equipment.
Innovations was implemented by Concern Worldwide and JSI R&T served as the global research partner. This report documents the pilot’s period of implementation and evaluates its effectiveness in achieving objectives, with a focused exploration of the pilot’s use of human-centered design principles and techniques.