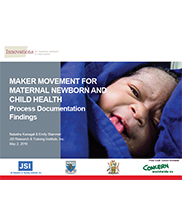 The Maker Movement for Maternal, Newborn and Child Health (Maker) was a pilot project implemented as part of the Innovations for MNCH (Innovations) initiative. Maker, implemented in Kenya, aimed to address gaps in the supply and availability of functional MNCH medical equipment at Kenyatta National Hospital (KNH) and lower-level facilities that are responsible for helping women deliver. Innovations was implemented by Concern Worldwide and JSI served as the global research partner. These presentation slides describe the pilot’s Process Documentation (PD) findings. The overall objective of PD was to closely examine the proposed change pathways in the theory of change and to:

The RME team wanted to describe the process by which the Maker hub collaborated creatively, organizationally and operationally to plan and implement their goal of designing prototypes for the labor and delivery and neonate wards at KNH. The learning from the PD was meant to inform implementation strategies through the continuous review of project operations and emerging challenges that would influence project outcomes.