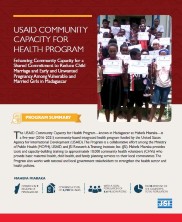 The Government of Madagascar recognizes child marriage as a form of gender-based violence (GBV) that contributes to the country’s high maternal mortality rate (478/100,000), and in 2007, the government promulgated a law that set the minimum legal age for marriage at 18 years. Despite this law, child marriage remains widespread.

Recognizing that adolescent pregnancy and birth complications are the leading cause of death among 15–19-year-old girls globally, Madagascar has developed a law and targets to address the poor health and economic outcomes related to early child-bearing. However, the goals established through these national commitments will be unattainable until the high rates of child marriage and early child-bearing are significantly reduced.

Several factors contribute to the ongoing practice of child, early, and forced marriage (CEFM) in Madagascar, including poverty and limited economic opportunities for families and girls, long-standing cultural and traditional practices, lack of importance given to girls’ education, girls being married for the sake of “protection” from the risk of becoming pregnant outside marriage, and non-application of the law in communities.

The USAID Community Capacity for Health Program is a five-year (2016–2021) community-based integrated health program funded by the United States Agency for International Development (USAID). The Program is a collaborative effort among the Ministry of Public Health (MOPH), USAID, and JSI Research & Training Institute, Inc. (JSI). The Program provides tools and capacity-building training to community health volunteers (CHVs) who provide basic maternal health, child health, and family planning services to their local communities. From March 2020 to March 2021, the Program targeted efforts to combat child marriage in three regions with rates of female child marriage higher than the national average of 37 percent.