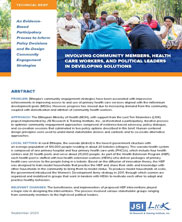 Problem: Ethiopia’s community engagement strategies have been associated with impressive achievements in improving access to and use of primary health care services aligned with the millennium development goals (MDGs). However, progress has slowed due to increasing demand from the community, coupled with demotivation and attrition of community health workers.

Local setting: In rural Ethiopia, the woreda (district) is the lowest government structure with an average population of 100,000 people residing in about 20 kebeles (villages). The woreda health system is composed of one primary hospital and four primary health care units (PHCUs), which include four health centers and 20 health posts and serve about 25,000 people. As part of the Health Extension Program (HEP), each health post is staffed with two health extension workers (HEWs) who deliver packages of primary health care services to the people living in a kebele. Based on the diffusion of innovation theory, the HEP was designed to train model households that practice the HEP and share their skills and knowledge with other households in the community to bring them to model status. To produce model households at scale, the government introduced the Women’s Development Army strategy in 2011, through which women are organized and mobilized in groups that work in tandem with HEWs to motivate each other to adopt and practice healthy behaviors.

Lessons learned: The iterative, participatory, evidence-based advocacy and policy dialogues were crucial to achieving stakeholder support and ownership of the proposed interventions and the process. The in-context interviews and immersions were pivotal to exploring desires, contexts, and insights of the target population that informed intervention design.