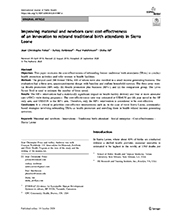 View this ArticleInternational Journal of Public Health, (2020)
Find Another Resource

In Sierra Leone, where about 40% of births are conducted without a skilled health provider, maternal mortality is estimated to be highest in the world, at 1360 deaths per 100,000 live births (WHO). Neonatal mortality also remains among the highest in the world at 33.2 neonatal deaths per 1000 live births (UN IGME; Statistics Sierra Leone and ICF International). Of the births unattended by a skilled health professional, over 90% are assisted by a traditional birth attendant (TBA). Yet reductions in both maternal and newborn mortality require access to skilled attendance during labor and delivery (WHO).

In many rural settings, TBAs are relied on by mothers and families, as they provide accessible and affordable care to mothers who may otherwise have no access to health services (Dorwie and Pacquiao). In 2010, as a strategy to increase the utilization of facility services for maternal and newborn health care, the Government of Sierra Leone introduced free health care for pregnant women, lactating mothers, and children under the age of 5 years (Government of Sierra Leone ). Yet despite these efforts, women continue to seek advice and services from TBAs outside of health facilities (Shiferaw et al.; Treacy and Sagbakken).

This paper evaluates the cost-effectiveness of rebranding former traditional birth attendants (TBAs) to conduct health promotion activities and refer women to health facilities. The project used 200 former TBAs, 100 of whom were also enrolled in a small income-generating business. The evaluation had a three-arm, quasi-experimental design with baseline and endline household surveys. The three arms were: (a) Health promotion (HP) only; (b) Health promotion plus business (HP+); and (c) the comparison group. The Lives Saved Tool is used to estimate the number of lives saved.