Implementing At-scale, Community-based Distribution of Misoprostol Tablets to Mothers in the Third Stage of Labor for the Prevention of Postpartum Haemorrhage in Sokoto State, Nigeria: Early Results and Lessons Learned 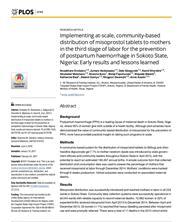 Postpartum haemorrhage (PPH) is a leading cause of maternal death in Sokoto State, Nigeria, where 95% of women give birth outside of a health facility. Although pilot schemes have demonstrated the value of community-based distribution of misoprostol for the prevention of PPH, none have provided practical insight on taking such programs to scale. A community-based system for the distribution of misoprostol tablets and chlorhexidine digluconate gel to mother-newborn dyads was introduced by state government officials and community leaders throughout Sokoto State in April 2013. A simple outcome form that collected distribution and consumption data was used to assess the percentage of mothers that received misoprostol at labor through December 2014. Mothers' conditions were tracked through 6 weeks postpartum. Verbal autopsies were conducted on associated maternal deaths.

Misoprostol distribution was successfully introduced and reached mothers in labor in all 244 wards in Sokoto State. Community data collection systems were successfully operational in all 244 wards with reliable capacity to record maternal deaths. 70,982 women or 22% of expected births received misoprostol from April 2013 to December 2014.