HIV Testing Among Black and Hispanic Immigrants in the United States 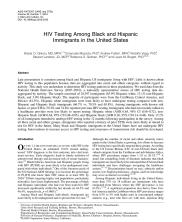 Late presentation is common among black and Hispanic US immigrants living with HIV. Little is known about HIV testing in this population because data are aggregated into racial and ethnic categories without regard to nativity.

Among all three racial and ethnic groups, immigrants who reported a history of prior STDs were more likely to intend to test for HIV in the future. Many black and Hispanic immigrants to the United States have not undergone HIV testing. Interventions to increase access to HIV testing and awareness of transmission risk should be developed.