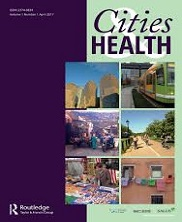 The dynamics of urban settings can increase health disparities. This paper explores techniques for examining urban health inequities of non-communicable disease risk, using data from the city of Indore, Madhya Pradesh, India as an example. We analyzed non-communicable disease indicators by gender, wealth, education, slum status, housing type, and location, using a 2018 city-level dataset collected in Indore with a final sample size of 3,070. Four techniques for equity analysis were used including bivariate ratios, concentration indices, geographic information system heat mapping, and multivariate regressions. We found that in Indore, behavioral risk factors such as tobacco, alcohol, and salt intake were more likely to be borne by those with low education and income, slum status and temporary housing type, while diseases such as hypertension were borne more equally over the population. This analysis has shown techniques that urban health researchers and planners can use to understand the differentials of noncommunicable disease risk and where action can be taken to reduce inequities. Use by city planners will be limited by technical feasibility and the production of understandable information. We discuss implications and next steps for Indore as an example for other cities.