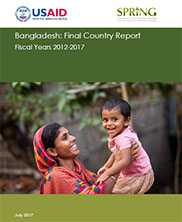 This document highlights the five years of the SPRING Project in Bangladesh.

SPRING implemented an innovative, scalable, and sustainable community-based, multi-channel, integrated nutrition program between April 2012 and June 2017. During this five-year period, the project reached more than 125,000 pregnant and lactating women (PLW) and their children through its farmer nutrition schools (FNS) approach, and nearly 6,500 FNS were established over this period. Further, SPRING trained and provided supportive supervision to more than 4,000 frontline health staff from over 1,400 health facilities, as well as nearly 1,000 frontline agriculture staff.

Improved nutrition practices were sustained at the community level a year or more after the FNS work had finished, an indication of the long-term impact of our work. There was also strong evidence of spillover to non-beneficiaries in SPRING’s working areas.

SPRING implemented the project across many upazilas (sub-districts) along the southern coastal belt of Bangladesh, in Barisal and Khulna divisions, which falls within the Feed the Future (FTF) Zone of Influence. We started with 15 upazilas in 2012 and successfully scaled our activities to 40 upazilas by 2013. SPRING remained in these 40 upazilas to both deepen and widen coverage to as many in our target population as possible. By the time SPRING finished activities in 2017, we estimate that we reached 60 percent of the target population of PLW within the two poorest wealth quintiles. JSI/SPRING Project, 2017.