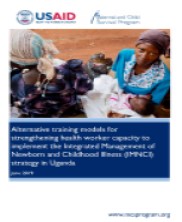 Uganda is among many low resourced countries that achieved significant reductions in mortality rates for children under five years of age (U5) over the last fifteen years, from 151 deaths per 1,000 live births in 1990 to 56 in 2016.2 However, the rate of decline in U5 mortality in recent years was not sufficient for the country to meet its Millennium Development Goals (MDGs) target that called for a two-thirds reduction in U5 mortality before the end of 2015. In addition, with a population growth rate of 3.5%, Uganda is one of the fastest-growing populations in the world. The country is among the few where the U5 population is expected to rise substantially and with it the number of U5 deaths. More than 70% of deaths among children U5 in Uganda are due to common preventable childhood illnesses (pneumonia, diarrhea, malaria) and neonatal conditions (prematurity, asphyxia, and neonatal infections).3 Inadequate coverage of known low-cost, high impact interventions to address these common childhood illnesses remains one of the major barriers to eliminating these avoidable deaths.

The 2016 National Demographic and Health Survey (DHS) showed that one in five (19%) children suffering from diarrhea did not receive any treatment, while only a third of those who received care were given the appropriate treatment of oral rehydration salts (ORS) and zinc tablets. Only four in 10 (39%) children with signs of acute respiratory infection were taken for treatment on the same day, and only half (55%) of children aged 12-23 months were fully vaccinated. To address the slow progress in the reduction of child mortality and move toward universal access to high-impact child health interventions, Uganda’s Ministry of Health (MOH) in 2016 launched a national Reproductive, Maternal, Newborn, Child, and Adolescent Health (RMNCAH) Sharpened Plan. The plan articulated five key strategic shifts that the country intended to undertake over a five-year period. The MOH, in this Sharpened Plan, identified the Integrated Management of Newborn and Childhood Illness (IMNCI) as the main approach to strengthen health workers’ capacity for delivering the essential child health package (ECHP) of low cost, high impact, evidence-based interventions. This report was compiled by JSI in 2020.