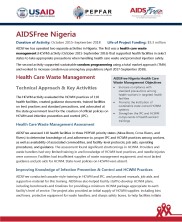 This End of Project Summary presents The Strengthening High Impact Interventions for an AIDS-free Generation (AIDSFree) Project’s programmatic achievements in Nigeria from February 1, 2017 to September 30, 2018.

AIDSFree increased providers' knowledge about HCWM and safe injection, and left a strong cadre of trainers in place at the project's end. The project also provided seed stock of basic HCWM and IPC supplies, and provided training for 339 logistics officers. By project's end, more than half of participating facilities had developed plans for institutionalizing HCWM and infection prevention; and AIDSFree had distributed a wide range of educational materials, job aids, and guidance to facilities. As importantly, the project's outreach to stakeholders led to state-level development of HCWM and IPC plans—a fundamental condition for sustainably safe injection and waste management.

In addition, AIDSFree secured the engagement of the National AIDS Control Agency (NACA) to lead and coordinate total market approach (TMA) efforts for condom programming. Market data collected under the project included data from the commercial sector for the first time. Condom supply coordination has been strengthened with AIDSFree reports that provide visibility into procurement and distribution of free condoms.