Raising Awareness of Tuberculosis in
Kyrgyzstan on World TB Day

The Kyrgyz Republic has one of the highest rates of multidrug-resistant tuberculosis (MDR-TB) in the world. Treatment for MDR-TB is long and difficult and treatment adherence is very challenging for patients. Stigma and discrimination prevent people from receiving an early diagnosis and starting treatment before their health worsens. Raising public TB awareness is the focus of annual World TB Day.

During the month of March, the USAID Cure Tuberculosis Project in the Kyrgyz Republic organized a number of events that emphasized the importance of TB testing and treatment and creating a supportive environment for people and their families affected by TB. Because for patients with TB, the social and psychological support of family members, health workers, and communities is critical to curing the disease, which is why encouraging positive behaviors and attitudes among people in matters related to TB is important. 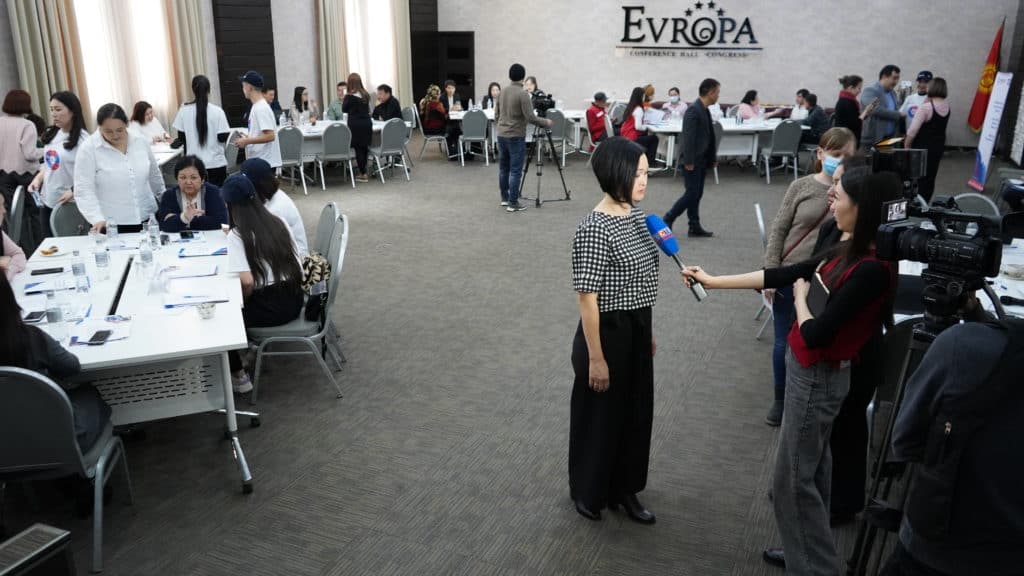 With support from Cure Tuberculosis, the Ministry of Health (MOH) organized a press cafe on TB prevention, detection, and treatment in Kyrgyzstan. The event provided access to first-hand, evidence-based information on TB from experts, and exhorted journalists to cover TB in traditional and new media to change society’s attitudes toward people affected by TB. Press cafe participants also had the opportunity to interview former TB patients who support TB patients on treatment. For the second year in a row, Cure Tuberculosis supported the MOH and National TB Center (NTC) by holding a contest for the best TB coverage among TV, radio, print, and electronic media. Contestants create content that encourages behavior change toward people affected by TB by telling personal stories from patients, caregivers, health workers, and community-based supporters. The event is meant to increase media attention around TB and improve media coverage quality. The winners will be announced on November 7, 2022, to commemorate the Day of Information and Press in Kyrgyzstan. Despite the growing dominance of social media in communicating information, conventional media resources like TV, newspapers, and radio still have a major role in informing the population, especially in rural areas. Cure Tuberculosis staff Emir Dzhumaliev, Ilgiz Abdyrasulov, Cholpon Ibraimova, and Temir Tologonov went on local TV and radio outlets’ medical programs and talk shows to discuss the health, social, and economic implications of TB for people in Kyrgyzstan. They also spoke about the importance of psychological support to TB patients and the detrimental effect of stigma and discrimination on diagnosis and treatment. Even though it is preventable and curable, TB take the lives of more than 4,000 people, many of them children, every day. As a way to raise awareness about the importance of speaking openly and broadly about TB, the Cure Tuberculosis Project in collaboration with the NTC holds an annual children’s drawing contest.

Young patients receiving treatment at the pediatric ward of the NTC illustrate their own experience with TB or facts people should know about the disease. Forty-five drawings were submitted and on the day that winners were announced, student volunteers from Bilge Club, a new Cure Tuberculosis partner, organized a small show. The children danced and sang for guests, and the event culminated with prizes for the winners. The Association of Village Health Committees which works mainly with the rural population across the country conducted World TB Day activities with health care workers, health committees, and non-government organizations for more than 8,000 people. TB People also held an information session at a prison and participated in the press cafe dedicated to World TB Day.

Each media outlet, patient, health care worker, community volunteer, and government official helped convey information about TB control and prevention, testing, treatment, and most importantly, engaging everyone in conversation about the disease to support those who need it most.